- December 09, 2012
After a good long wait, I finally got my Nexus 10 32 GB Wi-Fi tablet day before yesterday. Here are my review comments and observations about this device. All ratings are based on comparison with the new iPad.

Thin. I am really impressed by the thickness of this device. The 1.9 MP front facing camera is situated on the longer side of the tablet. When held horizontally with the front camera on top, the thickness tapers from top to bottom. The power and volume buttons are on the top. The stereo speakers are on either side of the shorter side. All these indicate that the device is supposed to be held horizontally for normal use. Includes a microUSB charger. It has a magnetic pogo pin charger port which I think is cool (but the charger does not come standard and has to be bought separately). It has a 3.5 mm headphone jack. One cool feature (which exists in the entire Nexus family) is the small LED located at the bottom which slowly flashes white when there is an email, and flashes blue when there is a Facebook update, etc. 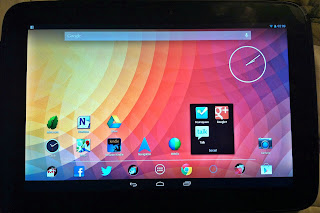 Great display, much much better than that of iPads' (spec says 2560 x 1600 pixels). If your primary use is to watch video, pics and other HD content, Nexus 10 is for you. It also has an HDMI out (micro) to connect to external display or projector which I believe must be made standard for all tablets. However, I have been hearing a lot of App incompatibilities with Nexus 10's display because they were originally designed for Nexus 4 / 7.

Device Performance (Rating: 3.5/5)
Device is super fast to use and graphics rendering is smooth. No complaints here.
Update: Charging the tablet is crazy slow. It took 2 hours to go from 30% to 50% charge. That Lithium Polymer battery needs some serious steroids. Nexus 10 has a GPS. Using free apps like CoPilot, N10 can be used for turn-by-turn navigation without requiring a wi-fi connection.

Camera (Rating: 4/5)
I am very impressed with the cameras. It has two cameras, the main rear auto-focus camera with flash and the front facing 1.9 MP camera. Panorama capture is a cool. Performs really well in the dark. Filters allows you to transform the pics to something creative. Below pic of my living was taken in the dark. 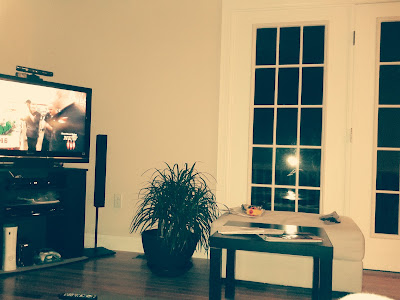 OS - Andriod Jelly Bean 4.2 (Rating 2.5/5)
Even though Jelly bean is fast, smooth, simple to use and has some neat features compared to iOS, it has serious issues (as of today). Bluetooth refuses to pair with my car. The OS just crashed abruptly after installing few apps and it failed to power on. I had to hard reset (by pressing vol +, vol -, power button together and plugging in the tablet to my computer's USB port - I know, what a long hard way). I think it is Bluetooth, but the battery went form 98% to 30% in 30 minutes. Yes, you head it right, 30 minutes. This looks like a serious bug. Chrome crashes once in a while. These are software issues and Google should have the fixes for then in the near future. OS is (obviously) very tightly integrated with Google services, so setup is very easy. Just do a single sign on with your Google account and all your contacts, emails, calendar entries, Google+ media, Picassa gallery, Google talk contacts, etc will get downloaded / available. My advice is to stick to one platform for all your devices (cell phone, tablet, online services, etc) - Andriod, iOS or Windows (as of now) so that its easier to access data across devices and you don't end up selling your soul to multiple tech giants.

Overall I give it 3/5.
I think Nexus 10 is a great device and gives you good value money. I hope that all the OS related issues gets fixed soon. Stay tuned for more..
Android Bluetooth display Features google iOS Jelly Bean mobile Nexus10 performance Review Tablet

Popular posts from this blog

In case you are stuck with this error, here is what I found. Problem - While trying to clone a virtual machine from a template or a VM (ESX 4.1), I get an "Invalid configuration for device '0' " error after the cloning was about 80% complete. Only items I changed for the VM (Edit Virtual Hardware option) were the MAC address for the NIC from Automatic to Manual and the ISO device type to "Client Device". Solution - What I did was to clone the virtual machine with the default settings and then make the required changes after it completes. Hope this helps someone!
Read more

Everything was working perfect until yesterday, my VPN client refused to connect to the server. I thought it was a temporary server issue until next day, I still couldn't connect. I uninstalled the client, made sure all flies got deleted, restarted my laptop (Dell Latitude E6400), re-installed the VPN client, and still no luck. I was getting the error as shown in the screenshot below. I checked my windows services (Start -> Run -> services.msc) and made sure that the Cisco Anytime Connect service is running with local system account Log On. I restarted the laptop and tried connecting again, No help. So, I raised a case with my company helpdesk. They changed the binding order of my laptop's network adapter so that the Ethernet connection (RJ-45) takes precedence over the wireless connection (See how to change the binding order ) . I went back home and tried connecting and it failed again. Weird.. what could be the problem? So again I took my laptop to the service
Read more

The theory behind successful Negotiations!

I was doing my Negotiations assignment while watching " Just Go With I t" with my wife on TV. Call it timing, I noticed a well executed negotiation between Bailee Madison and Adam Sandler. This is the second time I'm watching the movie ( twice!?!?, I know), but this time I could identify the "theory" behind the negotiation (thanks to my super awesome Professor Sarah Woodside - see her  profile here ). Searching for the clip on YouTube, I was NOT surprised to see the negotiation already been analyzed by someone else! Here's the clip and the analysis from YT.. haffun watching it.
Read more